Following the news from far away can sometimes distort reality. Granted reality can be distorted from any distance; therefore it is our duty to cross-check given facts to hopefully get a better ‘bigger picture’.

When the NYT reported about French youth voting for Le Front National, we must not forget that they actually voted en masse for another candidate (Jean-Luc Mélanchon) who is now out of the game [for actual numbers, look at the second table or see below]. Who will ces jeunes vote for in the second round of the French 2017 presidential election? We will know soon enough. 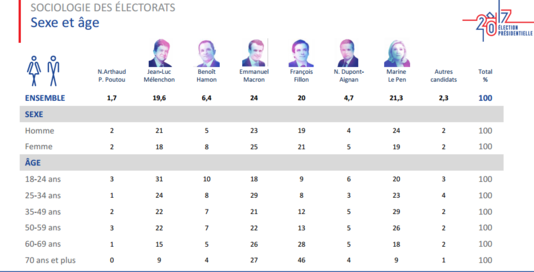 In the meantime, à la Georges Brassens, I have an impartial message to that jeunesse: Listen to your elders who, unlike you, have been there and have done a little of that. Here is an article on past résistants and concentration camps survivors who, unsurprisingly, warned us against the party of ‘hate and exclusion’.