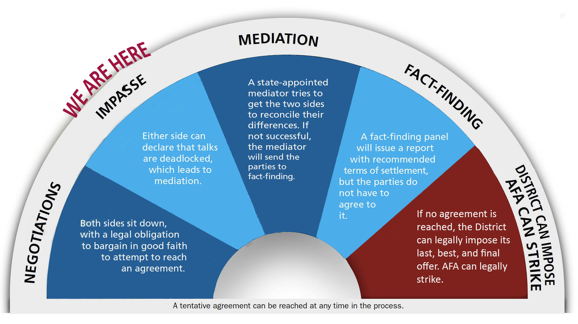 Q.  What is the situation in negotiations between the District and the Union?
A.  We are at impasse, which is a status determined by the Public Employment Relations Board or PERB. It means that continuing normal negotiations would be futile.
Q.  How did we get here?
A.  The District presented the Union with a take-it-or-leave-it package in November. The Union was willing to negotiate items in the package on an individual basis but not to accept the entire package, so the District asked the Union to join it in declaring impasse. The Union declined, so the District unilaterally submitted to PERB a request for determination of impasse. PERB concurred.
Q.  Does that mean the District can now simply impose a new contract on the faculty?
A.  No. A public employer cannot impose any new conditions until the impasse resolution procedures have been 100% completed. And the impasse resolution procedures are clearly codified in the Educational Employment Relations Act, or EERA.
Q.   What do the impasse procedures entail?
A.   The first step is mediation between the District and the Union by a PERB-appointed mediator.
Q.  When will that happen?
A.  The timeline laid out in the EERA is very aggressive. The PERB-appointed mediator has contacted both the District and the Union, and we are scheduled to begin mediation in late January 2018.
Q.  How does mediation work?
A.  The EERA states that the mediator can meet with each party separately and both together. The goal of the mediator is to work toward an agreement that is acceptable to both sides.
Q.  What if that doesn’t happen? Can the mediator impose a resolution?
A.  Mediation is not binding on either party. But EERA states that if mediation does not result in agreement between the parties after 15 days, the mediator may move the process to the next step, called fact finding, as long as either the District or the Union requests it. We would certainly request it.
Q.  What is fact finding?
A.   Fact finding is a more rigorous mediation process. The District and the Union each appoint one member to the fact finding panel, which is chaired by a PERB-appointed mediator. The role of the fact-finding panel is to establish clear facts surrounding the open issues and to recommend a resolution.
Q.   What powers does the fact finding panel have?
A.   The fact finding panel can compel witness testimony and subpoena documents from the educational institution. Negotiations between the parties continues during fact-finding, but unless the parties reach a resolution or both parties agree to extend the timeline, the fact finding panel must make its final recommendations public within 30 days. But the panel cannot impose its recommendations.
Q.  What factors does the fact finding panel consider in reaching its recommended resolution?
A.   The EERA identifies several specific factors that the fact finding panel considers, including the local cost of living, comparable salaries at comparable colleges, current compensation levels, interests of the public, and the financial condition of the District.
Q.  What happens if fact finding doesn’t work? Is there binding arbitration, or is that it?
A.   There is no agreement between the District and the Union requiring binding arbitration, although EERA states that the parties can make such an agreement. Or, if both parties agree, non-binding mediation may continue, led by a PERB-appointed mediator or another mutually agreed upon mediator. But if one or both parties refuses mediation or binding arbitration, the impasse resolution process ends in a stalemate.
Q.  If we get through the entire process with no agreement, can the District then impose its final offer?
A.  Yes. After disclosing its final offer in a public hearing, the District may then impose it. The Union then has the right to conduct work stoppages, including a strike.